Chocolate cinnamon macarons - sweet with a hint of fragrant spice and perfect for wintertime.

A rich chocolate ganache filling is flavoured with cinnamon and sandwiched between two macaron shells. The perfect elegant petit four to serve after Christmas or Thanksgiving dinner or at holiday season parties, I like to decorate my chocolate cinnamon macarons with a bit of gold lustre spray and piped chocolate to make them even prettier but macarons are one of the most elegant delicacies around and are just as pretty on their own.

If this is your first time making macarons be sure to check out my full detailed guide to making Italian macarons before you dive in. I always make macarons with Italian meringue rather than French or Swiss meringue, it gives them more stability.

Prepare and weigh out the ingredients, separating the egg whites from egg yolks if necessary.

Blend the ground almonds and powdered sugar together until they are a very fine consistency and completely combined. Sieve the mixture into a large mixing bowl.

Place the water and granulated sugar into a saucepan. Gently warm the water and stir to dissolve the sugar. Once it has dissolved, turn up the heat, stop stirring and place the sugar thermometer into the mixture.

Once the thermometer starts to climb above 105 degrees Celsius/220 degrees Fahrenheit, whisk the egg whites until they form soft peaks.

The Italian meringue will turn a smooth, glossy and opaque white. Continue to whisk once all of the sugar syrup has been added to bring down the heat until you can touch the side of the bowl and it feels warm but not hot.

Make the almond paste by mixing the remaining egg white with the ground almond/powdered sugar mixture until it is fully incorporated.

Now mix the Italian meringue into the almond paste in three stages.

Firmly mix in the first third of the Italian meringue with a metal or wooden spoon to loosen the almond paste and fully combine the two mixtures.

Fold in the remaining two thirds one at a time using the softer spoon or spatula, being very gentle with the final third to not overmix the batter and make it too slack.

Move the macaron batter to a piping bag. Tie a knot in the end and relax the mixture slightly in the bag with your hands for a few seconds. Cut half a centimetre from the tip of the piping bag.

Position the piping bag perpendicular to the tray with the nozzle a few millimetres above the surface. Squeeze the bag without lifting it up for two or three seconds, then stop squeezing and make a little circle to twist it off. Fill the trays leaving a 2cm gap in between each macaron.

Firmly smack it down onto the work surface twice to settle the Italian macaron batter and get rid of any air bubbles.

Bake straight away for 17 minutes, then remove from the oven and allow the macarons to cool on the tray. This is a no-rest macaron recipe, but if you cannot fit all of your macarons in the oven at once, it won't harm the remaining macarons to be out on the worktop for 17 minutes.

Chop the chocolate into small pieces.

Heat the cream in a saucepan until it reaches steaming point. Turn off the heat and add the chopped chocolate. Stir until it dissolves and you have a glossy ganache.

Add cinnamon to taste and allow to cool.

Melt the remaining chocolate and add to a piping bag. Decorate the shells as you like!

Hint: To cool and thicken up the cinnamon chocolate ganache before piping, put it in the fridge for 30 minutes.

Store leftover chocolate cinnamon macarons in the fridge and consume within 2-3 days.

Filled macarons do not freeze well.

Age the egg whites after separating them from the yolks by doing it a day in advance and keeping them in the fridge. It helps make a better Italian meringue. 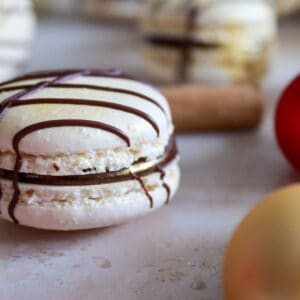