What could be more deliciously hearty than a turkey and ham pot pie, cooked in a cast iron skillet?

We make a creamy pot pie velouté filling with turkey, ham and leeks in a skillet before topping it with a golden brown and crispy layer of easy shortcrust pie crust on top. It's a delicious way to use up leftovers and cooked in just a skillet, so minimal washing up!

Why this is the best recipe

What is a pot pie?

A pot pie is the ultimate comfort food! It's a pie that traditionally only has a pastry topping, as opposed to being completely enclosed in pastry pie crust on all sides. It makes it lighter and gives you more space to fill it with a creamy and delicious pie filling.

How to make a thick pot pie filling?

To make a thick pot pie filling, make a velouté filling which is thick and velvety smooth. A velouté is made by adding a white stock like chicken, turkey, veal or even fish to a blond roux. This creates an incredibly delicious sauce for the pie filling, which is then made even more rich and decadent with a splash of heavy cream.

Check out the turkey and ham pot pie recipe card at the bottom of this post for the quantities.

You can use a variety of different pie crusts for pot pie, I like using shortcrust as it gives a nice contrast in texture to the smooth and creamy filling.

Sieve the flour and salt into a large mixing bowl. Cut the butter into chunks.

Rub the butter into the flour with your fingers until it resembles breadcrumbs as quickly as you can so that the butter stays cold.

Mix the egg yolk into the water and slowly add it to the flour mixture, one tablespoon at a time until it comes together into a ball. If you are using a stand mixer, put it on low speed.

Wrap the dough in plastic food wrap, flatten it into a disk and chill in the fridge.

You may not need all of the water and egg yolk mixture. Add it slowly and give it time to incorporate before adding more. We want the dough to be slightly moist to the touch, but not wet or sticky.

The skillet will be very hot so it is important to put the pastry on fast and bake straight away. Alternatively, you can wait for the skillet to cool to room temperature before adding the pastry and baking.

A bold southern Italian red wine from Puglia, for example, would pair beautifully with this skillet pot pie recipe.

I'm obsessed with making this creamy pot pie in a cast iron skillet as a way to use up turkey or ham leftovers, you could add other vegetables like frozen peas or green beans too if you had some, or swap out the turkey for chicken.

You can use store-bought pie crust dough to save time or even puff pastry to add a flaky lightness to the pot pie crust.

Try serving this refreshing blackcurrant mousse cake as dessert, it's light and zingy and is the perfect dish to follow pot pie.

The genius of a one-pan skillet recipe is that you only need one pan! I use a 26cm/10ince Le Creuset cast iron skillet. It's the perfect size for so many recipes, and does not require seasoning so is a lot easier to maintain than raw cast iron.

Weigh the ingredients for the cast iron pie using a digital scale, and try to avoid using the cup system in baking as measuring by volume is not precise enough.

I use Robert Welch knives.

Store leftover one skillet pot pie in the fridge. It may be easier to transfer it into an airtight container.

You can freeze pot pie filling and freeze pastry easily separately, or assemble the pie and then freeze it all together. But once baked, this turkey and ham pot pie skillet will not freeze well as the pastry can go soggy.

How long is ham pot pie good for?

Pot pie will stay good in the fridge for 3-4 days.

How to make pot pie thicker?

Add cream, or make a blond roux and whisk it into the pie filling if you have already made it.

Pot pie is healthier than traditional pie in that it has less pastry, but anything is healthy if enjoyed in moderation as part of a balanced diet!

Can you bake a pie on the stove top?

No, the pastry will not cook unless it is in the oven so you cannot bake a pie on the stove top.

Can you bake a pie in an iron skillet?

Yes! If your iron skillet is oven safe then you can bake a pie in it.

What makes a pot pie a pot pie?

A pot pie is a pie with a pastry topping, which could be puff pastry, phyllo pastry or shortcrust pastry. 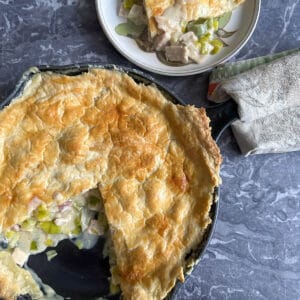