The cutest snowman macarons with cinnamon buttercream filling that taste so festive and are seriously fun to make this holiday season.

We make macaron batter as usual (and I always use Italian meringue to make macarons) but pipe them into a snowman shape on the baking tray or cookie sheet so that as they bake they fuse together and create the sweetest snowman macarons.

The art of making macarons can seem complex but once you get the hang of it you'll be a pro! The ingredients for macarons are very specific and it is important to weigh all ingredients precisely using a digital scale. Measuring by volume (for example the US cup system) is not recommended for baking macarons.

Here are the ingredients you will need to make these cute snowman macarons with cinnamon buttercream filling.

You can add food colouring to your icing (we make royal icing for this snowman macaron recipe) to get certain colours and have fun with it!

See the recipe card for all the quantities and full instructions.

Always use room-temperature egg whites when baking macarons and not eggs straight from the fridge.

To create pretty effects when piping buttercream and other fillings, have fun with piping nozzles.

Store leftover snowman macarons with cinnamon buttercream filling in an airtight container in the fridge and consume within 3 days.

You can freeze macaron shells before filling them, but do not freeze them once filled.

Is it better to make macarons with the Swiss, French or Italian method?

Everyone has their one opinion, but I believe that the Italian method for macarons is best as it gives the mixture so much more stability, making it harder to overmix the batter and preventing the macarons from going flat.

Do you need to rest macarons before baking?

The opinion is divided here! I do not personally rest my macarons before baking and have not found a difference when I tested it with this recipe. The argument for resting macarons is to allow them to form a skin on top before they bake, which forces any trapped air to escape through the bottom and helps the feet form and prevents cracking.

I like macarons because they are delicate, exquisitely sweet, and can be flavored in so many different ways. Macarons are also tricky to get right, which gives me an enormous sense of achievement when they turn out well.

Can you use any flour for macarons?

No, you need to use flour that contains fat, which is why they are traditionally made with almond flour from ground-up almond nuts. You can use other nut flours in macarons, like in these hazelnut coffee macarons which are another favorite of mine!

If you love baking homemade macarons then check out some of these other Christmas macaron ideas... 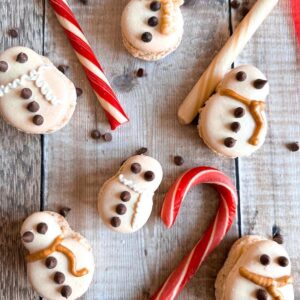