Homemade raspberry ice cream bars dipped in decadent melted white chocolate and coated in flaked almonds. This no-churn ice cream bars recipe is incredibly easy to make and looks so pretty, almost too good to eat! Unlike a traditional ice cream recipe with a custard base we use a mixture of yoghurt, cream and mascarpone cheese blended with raspberry puree. It's a quick and simple recipe and who doesn't love an ice cream bar! No ice cream maker is required, just a couple of mixing bowls and ice cream moulds.

Raspberry ice cream bars are best in the summer months when raspberries are in season but I often make a raspberry puree from our homegrown raspberries and then freeze it, meaning I can make this recipe at any time of year. Want to know what's in season and when? Join my mailing list and get sent a free PDF detailing all you need to know.

Homemade ice cream bars make a great summer dessert and having a set of moulds is so handy as it means you can whip something up whenever the mood takes you and freeze them for later. I have a habit of doing it whenever friends come over, and along with these raspberry ice cream bars I also love to make frozen cocktail popsicles.

This quantity makes 600 ml or 20 fluid ounces of mixture which will be enough for 4-6 raspberry ice cream bars depending on your moulds. If you have any leftovers you can simply eat it as a dessert, perhaps with some of the flaked almonds scattered on top.

See the recipe card for quantities.

Blend the raspberries into a liquid, and then push through a sieve into a mixing bowl to remove the pips/seeds.

Sieve the powdered sugar into the raspberry puree and stir to combine.

Mix in the mascarpone cheese, and then the yoghurt. Stir until fully incorporated.

In a separate bowl, whip the cream until it is thickened, and then fold the raspberry mixture into it.

Melt the white chocolate in a bowl over a saucepan of simmering water.

Dip the frozen raspberry ice cream bars into the melted white chocolate and then into the flaked almonds.

Put the homemade ice cream bars back into the freezer for 10 minutes to allow the chocolate to set.

Hint: Take the raspberry ice cream bars out of the freezer for 5 minutes before eating.

Here are a few ways you can adapt this raspberry ice cream bars recipe to suit you.

You will need the following equipment to make this no-churn raspberry ice cream bars recipe.

Store the ice cream bars in the freezer. I like to wrap them in greaseproof paper inside Tupperware. Consume within a month.

If you have leftover white chocolate and almonds, try dipping slices of banana or grapes into it and freezing them to make tasty snacks! 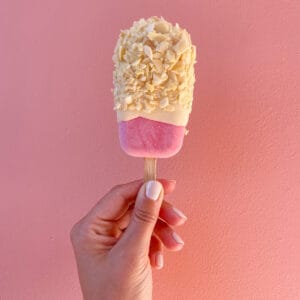