Toblerone lava cake in a mug - moist, delicious and takes under 5 minutes to make! This is the perfect quick late-night snack recipe to make when you have a craving for something sweet, because you cook the sponge in the microwave.

The idea behind a lava cake is that there is a hot pocket of melted chocolate in the middle, and Toberlone works well as you can break off a triangle and just sink it into the batter to melt whilst the sponge cooks. The honey and almond nougat also leaves little sweet crunchy bits in the sponge, it honestly is delicious. I love this Toblerone lava cake in a mug served on its own but it's even more decadent with a scoop of vanilla ice cream on top.

A microwave sponge cake recipe is a great one to have up your sleeve as it can be made so quickly and you don't need a ton of measuring equipment and weighing scales, just a teaspoon, a tablespoon and a fork to mix it all together. I experimented with this Toblerone lava cake recipe for a while to get it just right, and I'm so happy with how it turned out. And reader, a lot of Toberlone chocolate was harmed in the creation of this recipe. A lot.

I make this gooey chocolate mug cake with cake mix and it's very simple, just make up the batter in a bowl with a fork, pour it into a coffee mug and sink a few chunks of Toblerone chocolate in the middle. Microwave it and voila. You get a moist sponge cake with melted Toblerone in the middle ready to be devoured. I could almost eat the microwave cake batter on its own like a batter dip but trust me, you want this recipe warm.

This microwave sponge cake recipe for Toblerone lava cake was inspired by a poll I did on my Instagram, asking followers what food they looked forward to eating the most around Thanksgiving and Christmas. Someone answered Toblerone and I thought, what better than a quick microwave cake using Toblerone bar.

Have more time? Try some of my other desserts!

See the recipe card for quantities.

This Toblerone lava cake in a mug could not be simpler to make.

Take a small mixing bowl and whisk together the egg, sugar, oil and vanilla extract with a fork until all combined.

Then add the flour, baking powder and salt and stir in the milk gradually until it is a thick and gloopy but not runny. When it reaches this consistency, stop adding milk.

Pour the mixture into a coffee mug and sink a piece of Toblerone chocolate into the middle.

Serve on its own, with cream or with a scoop of vanilla ice cream.

There are infinite possibilities with this mug cake recipe, here are a few.

You will need a small mixing bowl, a fork and a coffee mug. So easy right?! You can even mix it in the mug but I prefer to do it in a bowl to give myself more room to manoeuvre.

This microwave mug cake is best enjoyed at the time of cooking, so just make as much as you need!

This also doesn't stand up well to freezing.

You can add more Toblerone if it will fit but keep in mind that the cake mixture will expand as it cooks due to the baking powder, so be sure to leave enough room in the mug. I fill mine just over halfway before putting in the chocolate. 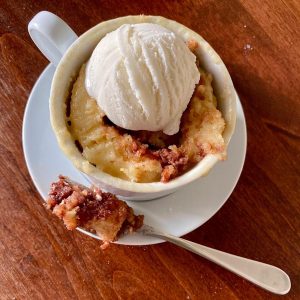 Toblerone Lava Cake In A Mug